The Life and Legacy of my Daddy....and why I Believe in Angels

The Life and Legacy of my Daddy 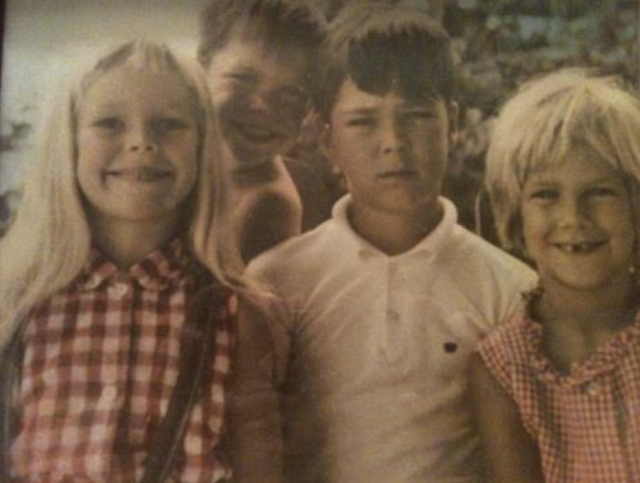 I'm not going to lie.  This will be a tough one to write.
Here I am, up at 4:13 a.m which has been the norm for a couple of weeks now.
But really, it's better than tossing and turning in your bed waking your sleeping hubs up right?
One of us has to be productive during the day and it really needs to be him more than me.

Let me start by saying this:
I truly, truly believe that angels are surrounding me at all times.  I have always believed this.  It is almost as if they are on my shoulders talking me through things.  I absorb this information and always have.  (Although those who know me also know I don't always listen to those angels). sadly enough.
In my dad's case which started 2 months ago, the angels sat on my shoulders and I tuned in. I followed them and their advice every step of the way.
Let's just go through it:
May 23 - My Step mother found dad in intense pain due to severe back pain and called me - My hubs and I took him to Grandview ER - they gave him morphine and pain pills that I knew the meds wouldn't last long
May 25 - called my orthopedic friend CJ Talbert to get him in, knowing he would schedule an MRI (1st angel)
June 1 - take dad to MRI. Dad could not be still for it.  The only time they could get him in for an open MRI was the next week.
I pondered over bothering CJ about this once again (I.e. pulling some more strings) but it had bothered me enough that I decided to pull that card and call him. Angel 2 - CJ got him in the next day.
June 2 - Take dad to open MRI. Angel 3 - tech immediately saw something and literally ran the CD to the radiologist. CJ called and said to get my dad to Grandview ER immediately.
June 3 - Angel 4 sent Robert Heideprim who is a vascular surgeon to assess.  Aortic Aneurysm the size of a 7mm orange.
Surgery was the very next day. God literally guided Dr. Heideprim's hands and needles and shrunk the aneurysm.  Simply amazing that he did not die on the table.
June 3 - Did a CT scan on brain.  Showed that the prostate cancer my father had treated 10 years ago had spread to literally every part of his body including parts of the brain.  It was advised to start Hospice Care. We chose to wait and try to treat the cancer through hormone shots. At least give it a shot. (a little bit of a pun there)
Angel 5 - y'all, if you are looking for a Home Health Care company, I recommend ONLY Right At Home. Beau Green (the owner) happens to be one of the finest humans I know. (and everyone says that). We chose to try the free medicare route for a couple of weeks first and 2 days of paid home health care.
Well. He was doing pretty well. Did a father's day celebration so he got to see and love on ALL of his children, grandchildren and great grand children. Niece Claire is doing her important work in Africa so we face timed!
June 29 - Monday - took daddy to podiatrist to have nails cut. THAT was quite a feat. (well, I guess another pun intended) He was pretty weak. But tucked him back in to bed when we got home
SO....June 30 - another angel on shoulder moment.  I got there that morning and he was SO tired. I don't know a lot about nursing (at least I didn't until now that I have gotten my nursing degree🤣) but decided to take his blood pressure for some strange reason. 85/55. wow. Called 911 and we ended right back up to Grandview. I think they may have given him 5 liters of water and kept him for two days.  While at Grandview 5 separate doctors and nurses recommended stopping cancer treatment and get hospice care.
Got a hospital bed delivered, and other medical necessities for home.
This was a really rough week to say the least, as a matter of fact, so many disappointing things had happened that my head was starting to spin around my neck like some type of demonic monster and steam was going to bust through the top of my head at any given moment.) but those angels just kept me going.  My sweet sister was also here from Atlanta to help me out.
July 2 - dad home from hospital.  Sister Kim and I met with hospice care.
A few difficult situations due to a lot of different entities. Won't bother going in to them because at this point they have been fixed and are irrelevant.
So, we decided to cancel all further on going cancer treatment on my father and go with just hospice care. And just really love on him.
____________________________________________________

July 6 - My angel brother came  and stayed for a week.
Everything kind of went along as expected, made him a wall of pride of pics of everyone, kids stopped by to see him and people face timed and called him to check. He was sleeping ALOT. SO, sister Kim came on July 16 - another angel of mine.  We realized that he was just not doing well at all.  All vital signs were perfect which was super weird. Little did we know, he was just simply ready to go! His amazing hospice nurse Valerie (another angel) came to see him on Friday, July 17th and said we should probably call in anyone who needs to see him this weekend.
SO. On Saturday by brother Clay and his wife Val came. Kim and I went over to clean him up that morning and then headed to my niece Ally's baby shower. About 4:50 that afternoon, my daddy lost his battle. He actually won because now he is probably swinging on his favorite gymnastics high bar in Heaven!!! (he was an amazing gymnast!)  I just cannot thank everyone enough for their prayers for us throughout this tough journey. I am not going to lie, this has been the hardest 2 months of my life.  Would I ever change it? No, because it has truly been THE most rewarding thing I have ever done. My daddy was loved by so many.  I loved him. He is now with God and the angels.!

Expect Care from Birmingham has been the most amazing place and full of an incredible team. I cannot recommend them highly enough.
Paid Health Care - Right at Home - well they are just amazing. Really.  I've never seen such caring individuals in my life I will put a link to both at the bottom of the page.

but first. let's just go through a few pics... 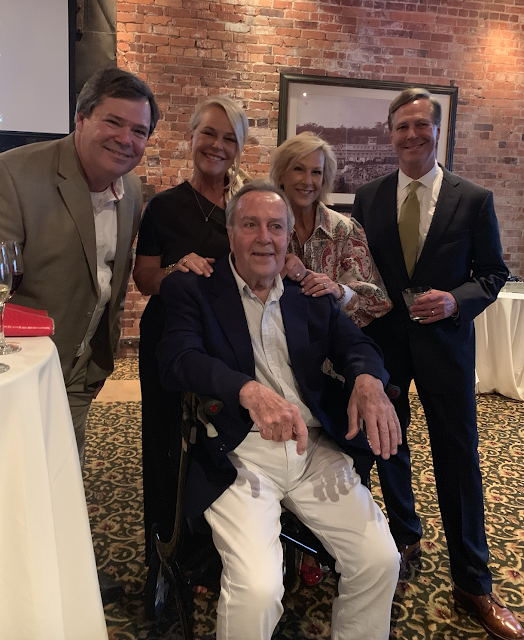 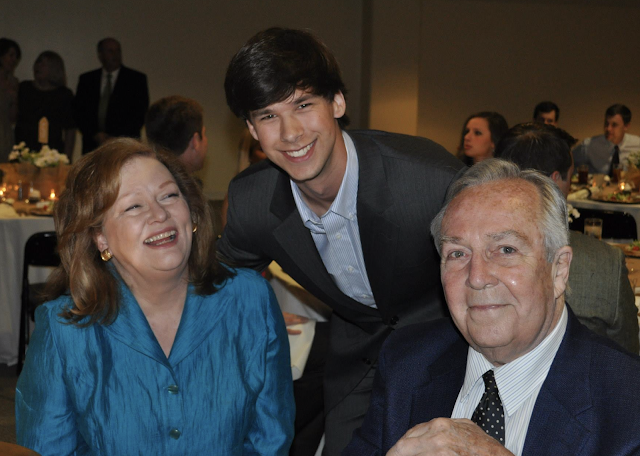 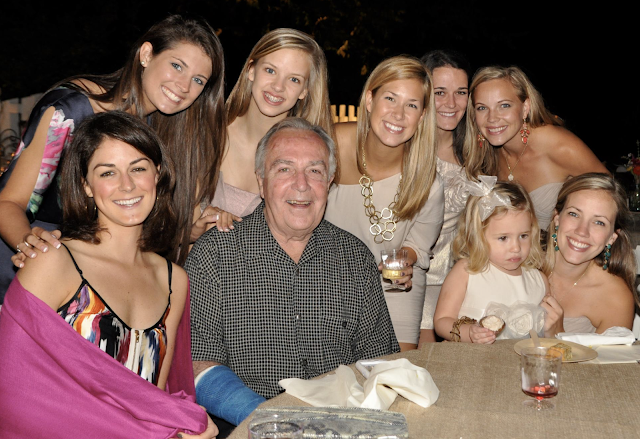 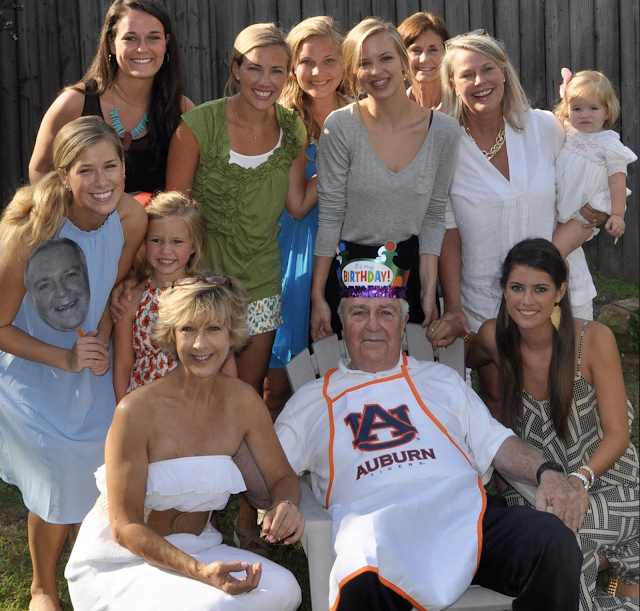 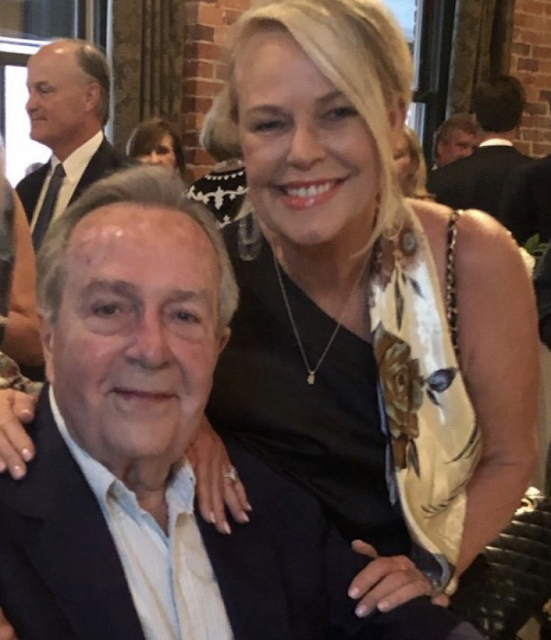 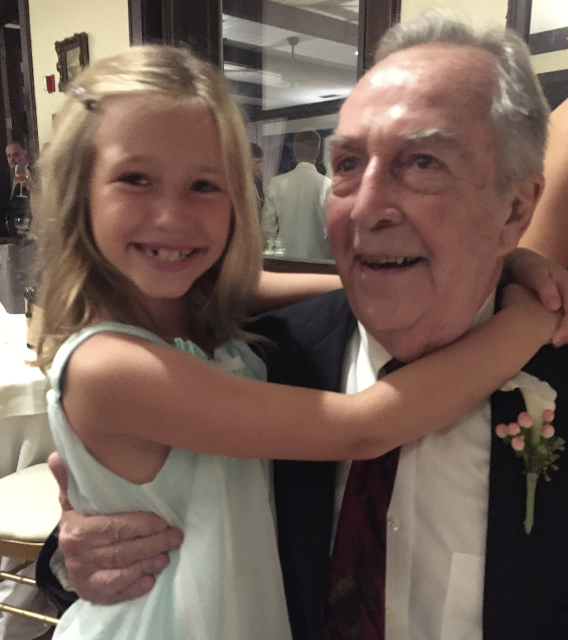 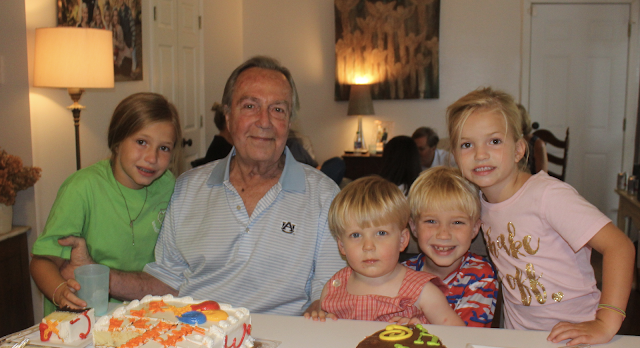 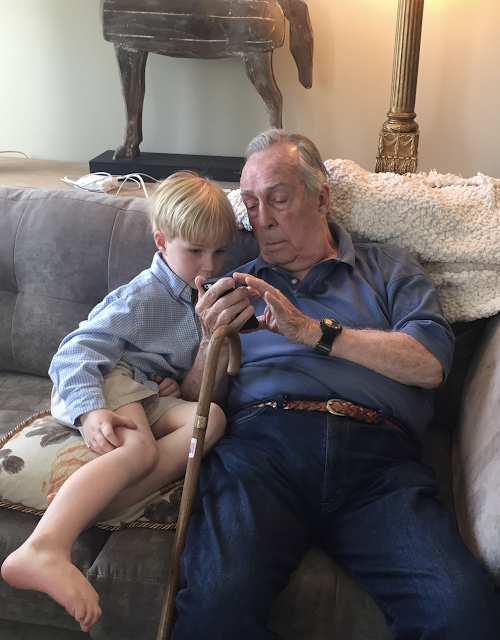 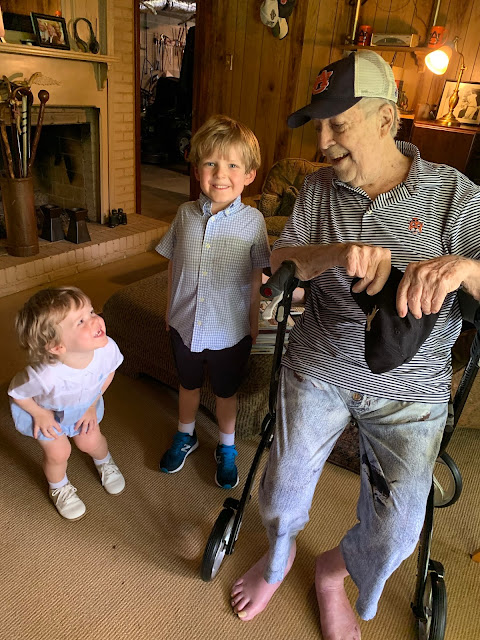 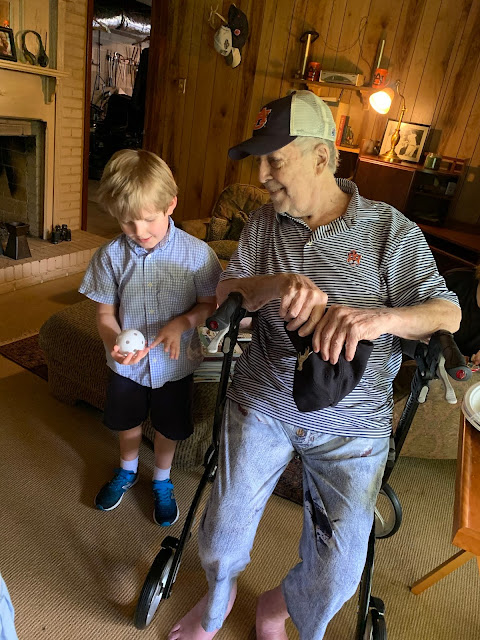 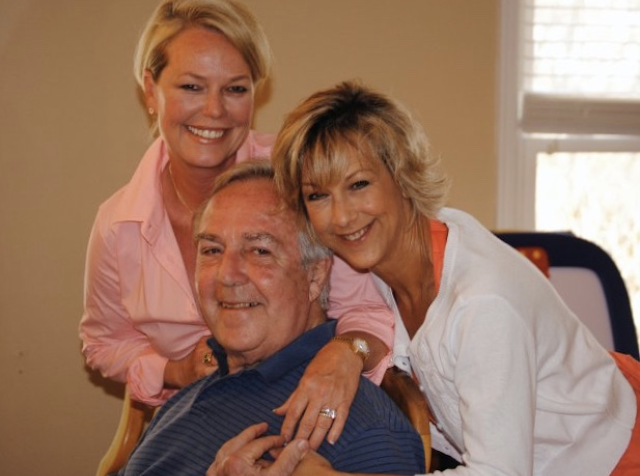 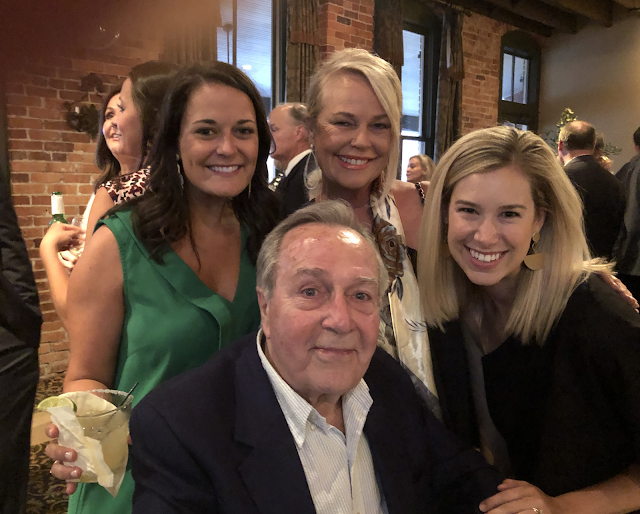 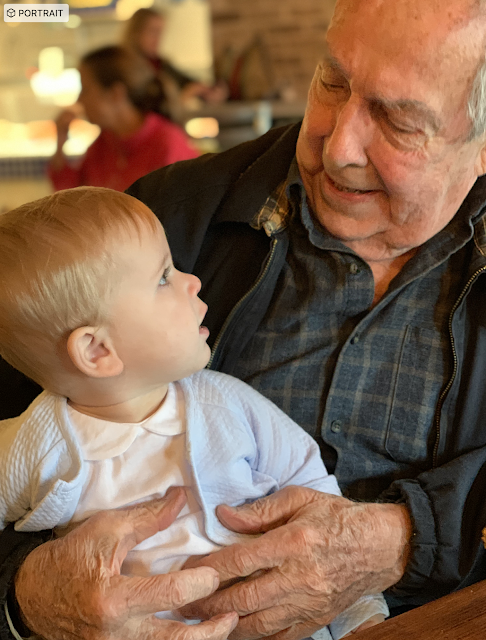 My father's Memorial Service will be at 2:00 Tuesday
Due to Covid restrictions we sadly must keep it to family and close friends only.
In lieu of flowers we are kindly asking that donations be made in my father's name to:
www.expectcare.com
***this is a non-profit hospice care team

If you would like to read more about my dad go here
https://www.dignitymemorial.com/obituaries/homewood-al/henry-callaway-iii-9266902?fbclid=IwAR1yq4aW3kMRcwmDPMSzdV8V6gGKhOswkCYFE-NuaJh1QC5kQjPOhma7W2k

Thank you all so very much to every one who has sent well wishes, encouraging words and prayers for my sweet daddy.
xoxo
Kendall
Posted by Kendall Boggs at 8:11 AM 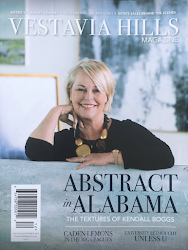